The “Bejewled Lip” is definitely in right now!! 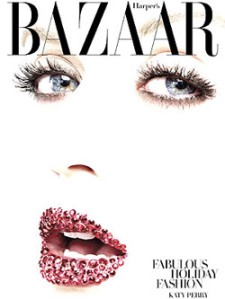 From the look of the December issue of Harpers Bazar, the bejeweled lip is a growing trend. Katy Perry is the cover model and is rocking the look very well.

Up & coming British artist, Jessie J, also rocked a studded & somewhat “bejeweled” lip in her video for her song, “Do It Like A Dude”.

I don’t know too many people who would be trying this look on a regular day, but it’s great for special occasions… like video shoots or magazine covers. lol.
Also, I really want to know who the makeup artist were for both Katy Perry & Jessie J, because I would love to know how they did it and how long it took.
Hmmm… if anyone finds out, let me know!