Feeling like a million bucks…
Last thursday I attended SUBMiT’s video shoot for his song, “A Million Bucks”. Now if you don’t remember I interviewed SUBMiT & Pharoh awhile back. It was a frat house at Kennesaw State.. it’s a party song.

I had never experienced a college party. The frat boys were playing beer pong….

Pharoh & another friend Brandon (check out his blog www.virginweekend.blogspot.com ) were also there to support.

Everyone was having a good time.. 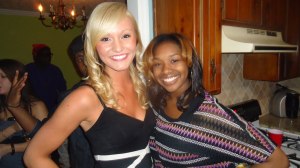 I even met new friends!! This is Kelsey she was the other girl in the video. 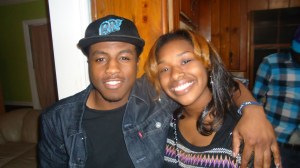 I got to catch up with old friends.. this is chance!

I didn’t come prepared, so I stole a little bit from everyone. I had on SUBMiT’s chain, shades, & hat (you cant see it.), & I had on the director’s jacket. LOL.

Here I am with the co-director, Cameron & the director, Abijeet.
They finished shooting a little after midnight.. then we headed to Waffle House. 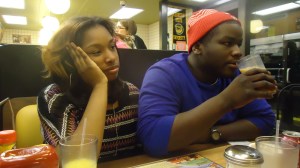 If you can’t tell I was super tired. I’m not cut out for all that.
The video was released today. So here it goes: (I have a little cameo… find me if you can!)