Yes, the Super bowl half time show has been renamed to BEYONCEBOWL. Since Pepsi announced that they would once again be sponsoring the half time show with Beyonce as the act, the Beyhive (the name Beyonce has named her fans) have been swarming. I don’t even think everyone will be watching for the game, but for the countdown to the big show… BEYONCEBOWL!
Since the announcement, the social media world has dedicated everyday towards the BEYONCEBOWL. I have seen so many people on twitter, instagram, facebook, etc. expressing their anticipation for the Beyonce performance! 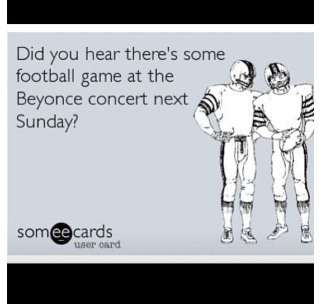 This ecard is one of the most popular items being passed around that I find pretty accurate. Ever since having her daughter, it seems everyone awaits to see Beyonce do any type of performance or appearance. Andy Cohen from Watch Happens Live had to show who the real winner of the Super bowl would be! 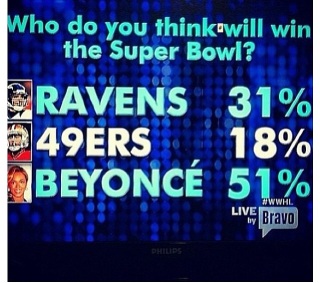 Even the NFL Players, know that February 3rd is all about Beyonce and they are fans too!
Now here’s the big question: What songs is she performing? I predict a new melody of songs with new choreography. If you’ve seen her “Countdown to the Superbowl” videos, you know she has been working hard practicing for the show. Personally, I am PRAYING for a new single to be released. At the Halftime show press conference, she advised her fans to wait until the end of her performance because she has an announcement. I have had her last album ‘4’ on repeat and I am more than ready to hear new music from her. Everyone is predicting a DC reunion, but I know it has been said that Michelle is acting in Fela right now. I personally think Beyonce will do the unexpected and maybe bring out a classic artist, like, Prince.  Someone she has mentioned to admire. Honestly, she could stand in one spot for twelve minutes and I will still scream for those twelve minutes, because it’s BEYONCE! And tomorrow is the BEYONCEBOWL!!!!!

Follow up tomorrow for my recap of the performance!